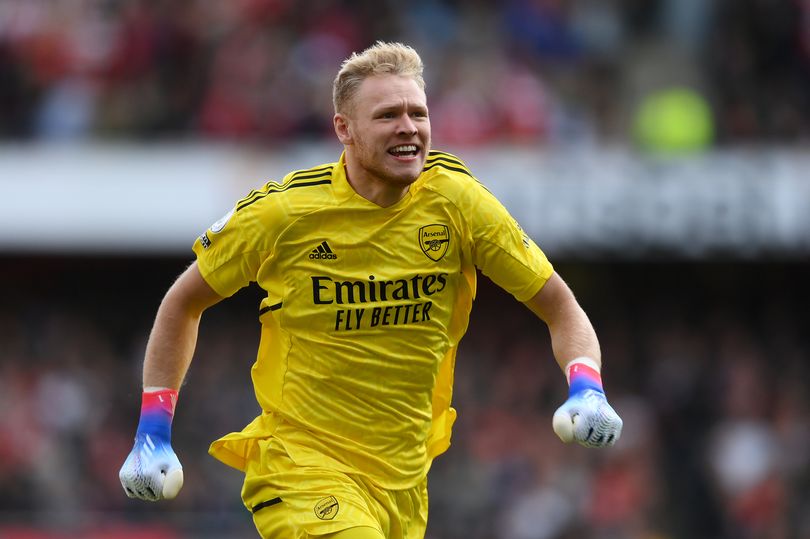 Aaron Ramsdale has said that he would be satisfied with finishing fifth in the Premier League if it meant that Arsenal won the Europa League. The Gunners currently sit top of the table on both the domestic and European stage after having enjoyed a bright start to the season.

The 24-year-old, who joined the north Londoners from Sheffield United last year for £25million, has featured nine times for Mikel Arteta’s side this term, keeping three clean sheets in the meantime. His impressive displays have steered Arsenal towards the makings of a title charge, but the shot-stopper has insisted that he would be willing to sacrifice what they’ve built this campaign in order to guarantee the club’s first major European trophy.

Speaking to BT Sport, Ramsdale revealed his targets for the season. And, while many may initially question the England international’s admission, there’s method to the goalkeeper’s logic.

Ramsdale said: “Lets be right, we got more chance of winning the Europa League than we have the Champions League – at this moment in time. So, silverware would be perfect for us.

“And the boss is really hammering that home at the moment that we can have a great season and win a trophy,” he added, before telling Joe Cole what his ambition is for the season. “Personally, I’d want to win the Europa League and if that means we sacrifice by finishing fifth in the league; you still qualify for the Champions League and you win silverware with it.”

In doing so, Arsenal would be placed in pot one for the proceeding Champions League group stage draw, as opposed to pot two or even pot three if they qualified via the top-four. Ramsdale added: “But Champions League for sure and then I think we give it a real good go in the FA Cup… and Carabao Cup. One of the domestic cups with a European trophy would be a perfect season.

Arsenal face Bodo/Glimt on Thursday night, October 12, in the Europa League as Ramsdale works towards his ‘dream’ season.